After a successful movie ‘PK’, Bollywood actress Anushka Sharma has marked a strong place in the film industry. Nowadays, the actress is even dominating in news about Virat Kohli and her relationship.

Anushka has worked with many Bollywood actresses in various movies, but her favorite actress is ‘Katrina Kaif’. Further the actress even doesn’t believe in bollywood cat-fight concept.

"As an actress, we need to kill those cat-fight things. I called Kangana (Ranaut) when I watched ‘Queen’; I called Deepika (Padukone) after 'Cocktail'. I was like more than excited about it. Katrina is my favorite co-star because I had such a good relationship with her. She is a real person and not pretentious. I had a great time working with her (in 'Jab Tak Hai Jaan'). I know she feels happy for me," she said.

You may also like: Anushka Sharma’s Seductive Shoot for Vogue Magazine India 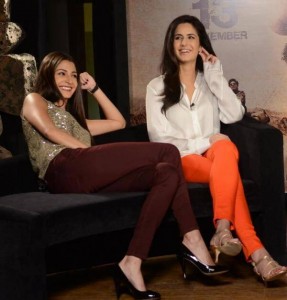 Recently Anushka Sharma is enjoying the success of her 2014 biggest release ‘PK’. In the year of 2014 her career graph has ascended with Aamir Khan’s ‘PK’.

Anushka said, "I won't lead my life little bit if I was not happy. I know what I want to do and I don't like falling into brackets and categories. I didn't want to do too many films. Whatever I have done, I have done best. People give advices but I do what I feel is right. I am very satisfied right now. I wanted to work in good films and good directors and i think my career graph is going well," she added.

This year in 2015, we will get to see Anushka Sharma in upcoming three movies, NH10, Bombay Velvet and Dil Dhadkne Do.

Get more about Anushka Sharma updates from Bollywood News.

Rapper Nicki Minaj Breaks the News of Her Teenage Abortion!