Bigg Boss 8 contestants are habitual of breaking rules of the house and we all have witness it time and again. Though we talk about being physical during an argument, sleeping during the daytime or talking in English, the contestants have been penalized for all. However, this time it seems a major rule of the house has been broken!

Well according to reports, Bigg Boss Halla Bol contestant Karishma Tanna has brought a mobile phone inside the glass walled house. Many fans of the show lately took it to twitter asserting that, they have seen a mobile charger in the smoking area of the house.

Where Gautam Gulati’s fan believes it to be a phone, on the contrary some feels it was a hair-straightener charger or a hookah charger. 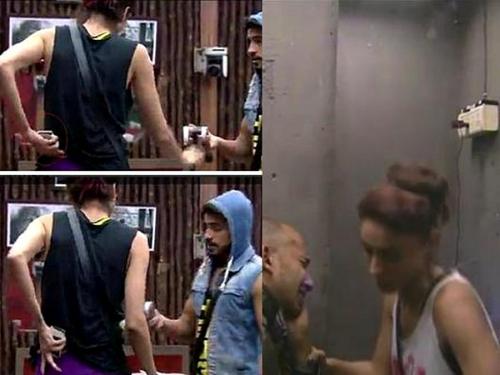 If It Wasn’t A Phone That What Was Karishma Trying to Hide?

Many fans even posted pictures of Karishma Tanna with a thing similar to that of a cell phone, which she was trying to hide from the view of Gautalm Gulati.

Well we fell that hiding a smallest thing in the glass walled house amid myriads of cameras is not easy as a piece of cake. Moreover, as much as the charger is concerned it could even be a hookah or hairstyler charger as well! However the leaked pictures of Tanna suggests something else, this incident has made some of the fans to even doubt the authenticity of the show.