The recent released film of both the stars got positive vibes from their fans. Previously Bodyguard and now Bajrangi Bhaijaan had scored high on the box office. The scorching chemistry between them always lightens the floor.  Recently the duos had done the photo shoot for the Film fare magazine for July 2015 edition.

Strongly Bebo is a picture of fashion and racy figure while Salman enfolds a picture of tantalizing selfdom. In this bold black gown Kareena is looking ravishing and Salman Khan with this impish fire in eyes is appealing the crowd to go all set on the floor. 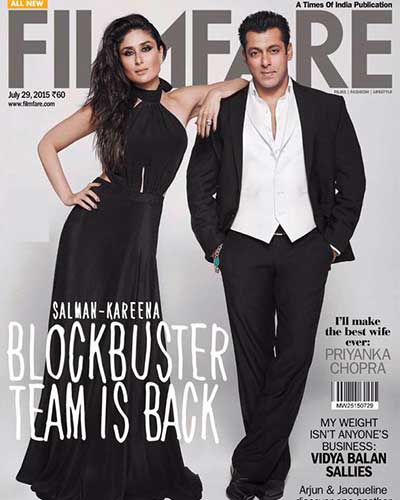 Above you had stared the pictures of their photo shoot but now check out this video which is completely out of the box.

The spell of their union has poured out over their films and their fans can’t stop chatting about them. Now you got another topic to chat about them is for this scorching photo shoot.