The popular journal Harpars Bazaar Magazine, this time picked up Shahi begum of the Bollywood industry Kareena Kapoor as their cover girl for December – January 2015 edition.  After garnishing the front cover of Vogue magazine the actress is now shining the Harpars Bazaar cover page. While donning the beautiful long embroidered floral print outfit styled by Rahul Mishra, Kareena Kapoor is popping up as the beautiful chic.

The vignette on the cover is showcasing the lines of modish bride to be. Overall Kareena Kapoor aka Bebo is looking gorgeous and eyeful as never before. 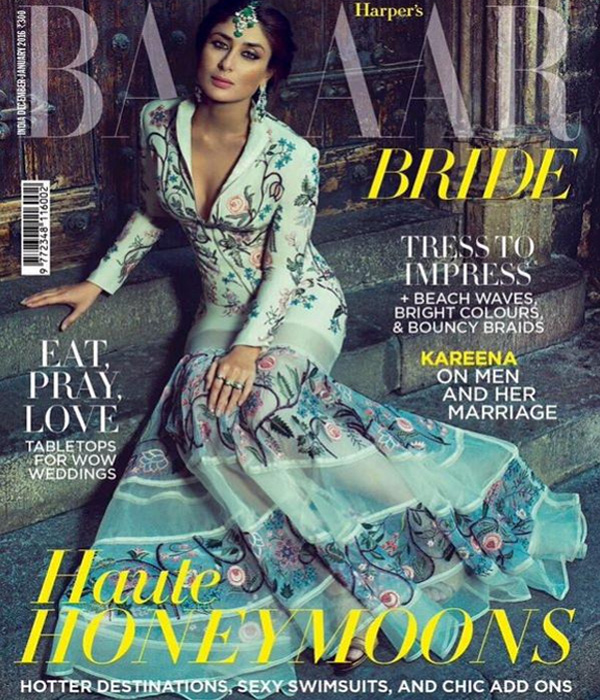 The talented actress of the tinsel town is leasing peace and confidence through her amazing expressions. With minimal makeup and heavy earrings the Begum is giving a way to the new trend. Kareena Kapoor Pics can also be spotted on the front covers of different top magazines like Stardust, Grazia, Hello and others.

Two films are lined up for the actress for next year. She will be seen opposite Shahid Kapoor in Udta Punjaab and with ‘Ishaqzaade’ Hero Arjun Kapoor in ‘Ki and Ka’. Watch this space for more Bollywood Gossips and masala news, till then enjoy Kareena Kapoor sizzling avatar on Harpers Bazaar Magazine for December- January 2015 issue

Rekha in Saree - An Ideal of Graceful Beauty