Written update of 23 January 2015 episode of Meri Aashiqui Tum Se Hi: The serial took a very romantic turn when the thaal fell down from Ishani’s hand and the oil spilled over the floor. RV and Ishani slipped on the floor .They both struggled, but the oil made the floor even slippery to stand up. He held her hand helping her get up but she fell over him and they looked over each other. Then both stood up and he said her that, she doesn’t need to say anything as her ritual has accomplished.

Ritika came to shraman’s house for meeting Derwash, Pratik and family. She gave some gifts and ‘till k laddoo’ to Pratik. She asked about Sharman. 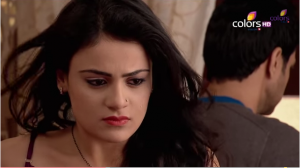 On other side of Meri Aashiqui Tum Se Hi , Amba gave a black saree to Ishani and said herthat she must knowing that gifting red and yellow sarees today is a good gesticulation, but she isn’t a jinx so she is gifting her black one. Her husband has denied accepting her as wife; so she must daily wear a black saree.

In the hall, Ranveer said Amba that, he is going for kite flying and Amba replied she will send all the food there.

Here Ritika said Sharman that, She did a big mistake, she lost an earring that he gifted her last night so she is wearing one ear-ring. But he replied that, he got her ear-ring. Then she thanked him and told him to put on the earring by himself.

On the terrace, everyone was busy in kite flying. Ishani saw RV flying a kite; she took the reel from servant’s hand and said, she will always come behind him wherever he go. She got a cut on her hand, RV fights well in the kite flying. Ritika’s kite cut down, Ishani cheered. RV smiled. Ishani said RV that, she saved their kite from cutting. RV said it wasn’t theirs, it was his; from now on it is only mine and yours, nothing is ours, and Left from there
Prev article