After the finale of Khatron Ke Khiladi season 6, the newest season of chart-topping talent show of the country, India’s Got Talent season 6 premiered on Saturday. The show has been very popular since its very first season to bring some of the unbelievable talent from around the corners. This time also following the history, the first two weekend episodes brought a lot of Dhamaal for the viewers.

The three judges from India’s got talent show, Karan Johar, Kirron Kher and Malaika Arora Khan were seem having a tough time amid some tremendous and few quirky performances. One of the performed named Jaideep brought something very awesome on the table for the judges.

His water act made everyone so mesmerized that the judges blown the golden buzzer for him! Akshay Kumar who was present as the guest judge, himself get under the water and performed the few of his dance steps inside with Jaideep. Wow, that was amazing. 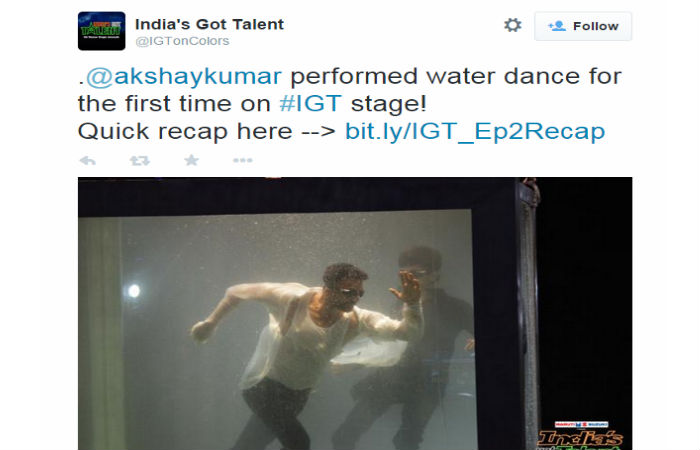 Another high point in India's got talent was Karan dance! Oh Sorry! Chair dance. A contestant was seen performing chair dance on Karan Johar’s lap, who was seen giving some hilarious expressions. There were mentalist, metal and many dud performances amid some super cool acts. We are sure the judges would have enjoyed both.

India’s Got Talent 2015 Promises to Get a Lot of Unseen Talent!

Well we would say, this is just the beginning, there are loads of mind boggling as well as fierce acts and performances in the box that would be out in the upcoming episodes of the show! India’s got talent 2015 has shown that, Indian indeed has got a lot of talent!