We are taking about a scene between Saif Ali Khan and hot Ileana D’Cruz from the forthcoming Bollywood release, “Happy Ending”. As per the scene Saif Ali asks Ileana hot to strip, and surprisingly Ileana helmed the scene with comfortably and confidently.

You may also like: Vaani Kapoor V/S Ileana D’Cruz Who Will Become SRK Fan?

"I was waiting to do that scene. Raj (director) told me that if I was not comfortable with the scene, we will scrap it altogether. But I thought it was really cool and insisted on doing it. Saif and my character are shown spending the night together, so what is the big deal in taking the top off? It's not shot in a crass manner, it looks cute. And Saif had the perfect expression which really mattered, otherwise it would have been cheeky and ugly." 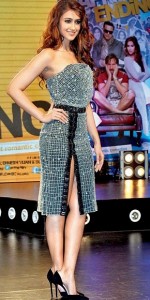