Well, according to the latest reports your favorite hit comedy starring Paresh Rawal, Sunil Shetty and Akshay Kumar, ‘Hera Pheri’ is all set to tickle your funny bone yet again with its third installment.

John Abraham and Abhishek Bachchan to Star in ‘Hera Pheri 3’!

After a long interval of eight years, Firoz Nadiadwala would be making a comeback with 'Hera Pheri 3'. While, you would get to see the laughter riot however the super hit trio of Paresh Rawal, Akshay Kumar and Sunil Shetty would no longer be seen together. Replacing Khiladi Akshay Kumar the third installment of the film would take in ‘Dostana’ movie actors and the ‘maa de bigade ladele’!

Yes, you guessed it right Abhishek Bachchan and John Abraham would going to be the part of the laughter series, ‘Hera Pheri 3’ along with Paresh Rawal, Sunil Shetty and Irfan Khan. 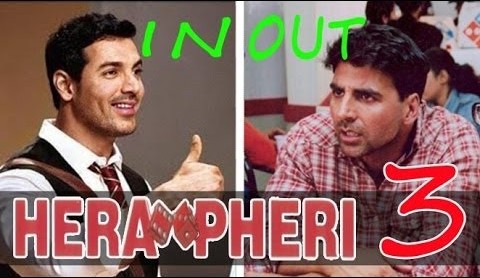 The film is apparently expected to go on floor in June this year and would be shot majorly in Dubai, Mumbai along with Las Vegas. The director Neeraj Vora confirmed the news in a conversation with a leading daily saying,

“The essence of the first two films will be retained but the plot is completely new. Hera Pheri 3 will start from the point where the second film ended - the part where the boys are left hanging (a sequence borrowed from Guy Ritchie's Lock, Stock and Two Smoking Barrels)."

Checkout What the Cast of the Film, Heri Pheri Said?

"The plot demands his absence. Once you see the film, you'll understand why he isn't in this film. But rest assured that the humour will be several notches higher."

You may also like: ‘Kaun John?’ said Bipasha Basu at Comedy Nights with Kapil!

The other key character from the film Paresh Rawal on the other hand said,

"I've allotted a chunk of dates which don't clash with my other commitments. Hera Pheri is a fun film, there was no way I'd let go of this one."

Suniel Shetty is also thrilled to join back his Hera Pheri team,

"I had decided not to take up any films without giving it a lot of thought. I'm thrilled to go back to Hera Pheri and work with John, Abhishek, Irrfan and of course, the brilliant Paresh Rawal."

Now it would be very interesting to see how this quartet would makes us roll in the aisles!

Get more updates about 'Hera Pheri 3' movie from Bollywood news.

Huma Qureshi and Saqib Saleem to Star in 'Oculus' Remake