Well, if not then you would be taken aback to know that lately Sunil Grover, your very own Gutthi walked the ramp at Myntra Fashion Week for Mandira Bedi’s show.  Wearing a fuchsia sari with a big red bindi, Gutthi was seen stealing the show, amusing everyone.

You may also like:  Kapil Sharma Reached in Dubai with “Comedy Night” Team 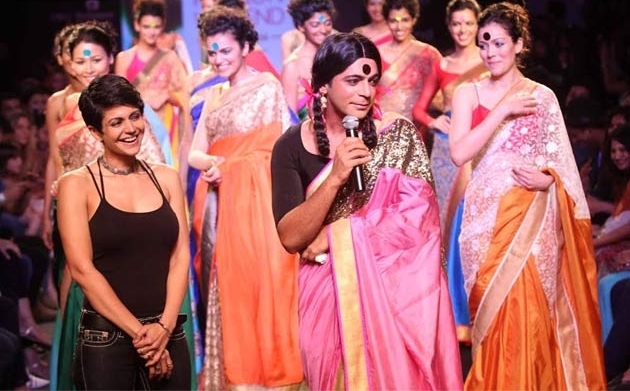 When the diva was asked about picking Gutthi as the show stopper, Mandira replied, "Gutthi is a very popular and much loved girl. Sunil has gained lots of popularity and love for his feminine character of Gutthi. So I thought of taking him to walk the ramp for my designed clothes. The theme of this fashion week was light and joyful and accordingly the showstoppers were finalized. My collection was based on Joy and love. As joy means happiness, fun so the better choice for the theme was none other than Gutthi who is best at it. So that is why I thought of taking Gutthi in this fashion show. As per the saying 'there is always a first time for everything' so quite happy to take him for this show.”!!

Aamir Khan, Wishes To Be Sanjay’s ‘Circuit’ In Munnabhai Series