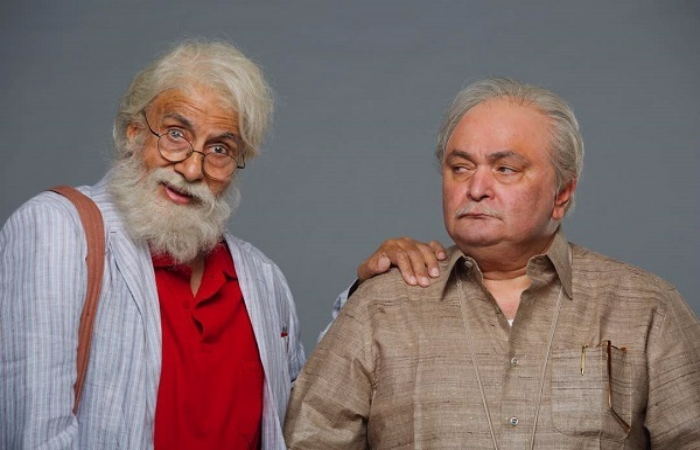 How adorable the two look together in the above picture? No, ita��s not an ad but this is the first look of Umesh Shuklaa��s directorial 102 Not Out. He is the one who marks the reunion of these 2 veteran actors after 3 decades.

Amitabh Bachchan to play as a 102-year-old father to 75 years old son (Rishi Kapoor). The plot will highlight the romantic comedy and relationship between father and son. Is there any reason to miss 102 Not out with so many twists?

Amitabh Bachchan and Rishi Kapoor to weave the Same Magic Again after 26 Years?

The internet is equally celebrating the reunion of the two. Where many are falling short of words to express how cute they look together. We still cana��t believe that the 2 legends have actually taken up the film which challenges more than their age. Look the twitter reactions below:

Elaborating on the charactersa�� to be played by Amitabh Bachchan and Rishi Kapoor director Umesh Shukla quoted in an interview saying:

a�?Amitji and Rishiji are collaborating after 26 years. They are playing GujaratiA�characters for the first time. Being a Gujarati myself, I had certain references in my mind which we used to create their look. The film went on floors on Wednesday as they shot Big Ba��s introductory scene. The cast and crew will be shooting for the film all over Mumbai till May end and directly resume in July. Umesh and his team wish to wrap the film by July end.a�?

Whata��s cuter than this! 2 veteran actors Amitabh Bachchan and Rishi Kapoor as father-son from Umesh Shuklaa��s 102 Not out!!

What are your thoughts on this amazing chemistry and adorable look? Drop your comments below.

Interesting it is! Hrithik Buys a Lavish Apartment for Sussanne Near his Home! But Why?