Right from the posters to the teasers and music to the trailer, every bit of KJohar’s directorial Ae Dil Hai Mushkil has excited us a lot. No doubt everyone is eagerly waiting to see the scorching chemistry of Ranbir and Aishwarya on silver screens.

Many of the moviegoers are waiting to see Aishwarya’s beauty and Fawad Khan Hotness on silver screen as the stars are really looking out of the box.

Click To Know : Directors don’t want you to See The Pics of the sets of ADHM 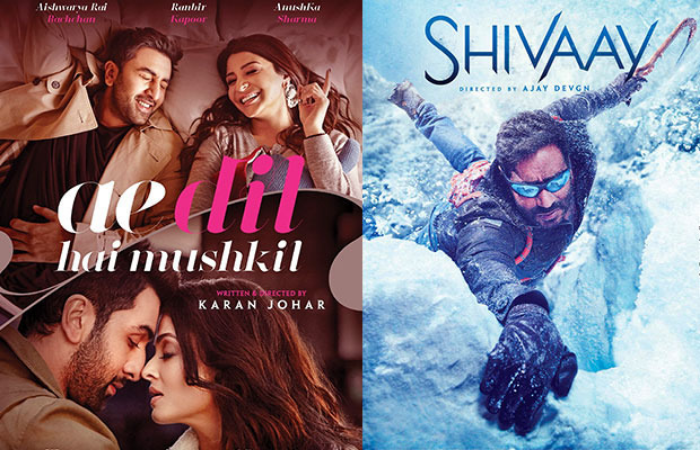 Ajay Devgn’s 'Shivaay' and KJohar 'ADHM' are the two major films of the year. The two of the movies have major connection between them. Both the movies are getting release on the same date. And the films are undergone the controversy. In the beginning of both the movies, there would be attached the trailer of other two anticipated films.

Yes! You will be seeing the trailer of the movie 'Dangal'starring Aamir Khan in Ajay Devgn’s Shivaay and the trailer of Hrithik Roshan’s Kaabil in the beginning of ADHM. Wow! It’s like a double treat for the movie goers.

That’s so cool! Now after knowing the trailers too which of the movie you will be watching? Well, the poll says Ajay Devgn’s Shivaay will collect more at the box office. Drop your thoughts below?