According to reports, the makers of MS Dhoni’s biopic, Featuring Sushant Singh Rajput had plans to launch the first look of the film during World Cup 2015, against Pakistan on Sunday.

But due to team India’s poor performance, the makers of M S Dhoni’s biopic, have decided to cancel the launch.

You may also like: Sushant Singh Rajput Announces Release Date of Dhoni Biopic

A source reveals that -

"India's poor form has been a cause of concern with several experts and ex-cricketers doubtful about the team's chances of victory in its opening match. So, the makers of the Dhoni biopic were sceptical of flying down to Australia and making the announcement there."

Dhoni’s Biopic Delayed Due to his Retirement from Tests Series

The biopic of the Indian Captain, Dhoni was to go on floor, last year in 2014 and directed by famous director Neeraj Pandey. But recently the release date of the film was delayed due to Dhoni’s sudden announcement of retirement from Tests series.

Also the script had to be changed and till now only the first look of the lead actor Sushant Singh Rajput wearing M S Dhoni’s 7 no. Jersey has been launched. 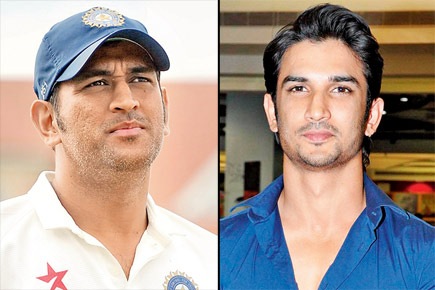 A closed source stated that-

"Though plans to launch the film on the match day have been cancelled, they may go there during the later stages of the World Cup. At present, Sushant is also busy with the promotions of Detective Byomkesh Bakshi and wouldn't have been able to go to Australia."

Recently the superhit movie ‘Baby’s director Neeraj Pandey has directed a music video ‘Phir Se’ that will be released on Sunday 15th February, during the World Cup opener against Pakistan.

"Phir Se is an anthem, plea, prayer, dream all rolled in one. MM Kreem sahab (music director) and Manoj Muntashir (lyricist) have done this beautifully."

Of course there is no doubt that a millions of fans of Dhoni would be praying and hoping to bring the World Cup back to India.