Famous actor and singer Dhanush, who is all set for his second bollywood endeavor with forthcoming film Shamitabh, has recently been nominated as the brand ambassador of 7up cold drink brand.

‘7up’ is a popular soft drink brand that has also released new attractive and creative ad campaign like, ‘Tu Up Toh Duniya Up’ and second is ‘Feels Good To Be You’.

You may also like: Watch Out: What Dhanush Wants to Say in ‘Shamitabh’s Second Trailer

"We are thrilled about our association with Dhanush as he embodies the spirit of our brand inherently,"

Actor Dhanush Talks About his 7up campaign 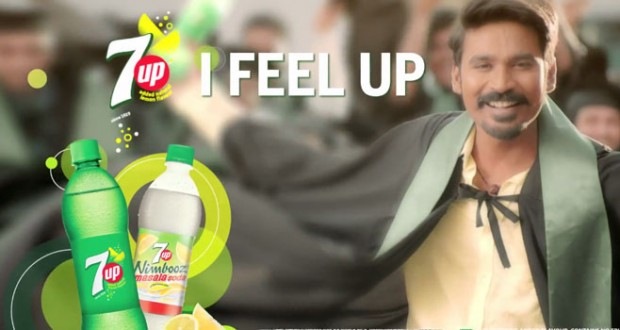 Actor Dhanush said he is glad to be the part of 7up ads "interesting and exciting campaign".

"We all change ourselves to suit the usual norms but I am glad that this campaign encourages people not to lose their original self to celebrate their authentic self," he added.

We will be able to see Dhanush promoting 7Up in its ads soon and his upcoming film Shamitabh as well.

This film is set to release on 6th February, 2015. Bollywood mega star Amitabh Bachchan and Akshara Haasan are the co-star of the actor in the movie.

Get more update about Dhanush’s ‘Shamitabh’ movie from Bollywood News.