Bollywood celebs have lent its support to the hundreds of people. Recently Kashmir again covered by flood. This is the biggest flood in the last 60th years and too many human life is affected by this. 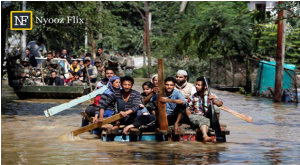 As flood waters reach amazing levels in the hit Kashmir state, people around the world send their prayers wishing well for victims in distress. Bollywood too is not far behind. Expressing their concerns, several celebrities took to twitter to talk flooding and pray for a touchdown.

Hope and Pray the flood situation in Kashmir gets controlled sooner than soon.

Half my family in Srinagar. Many stuck on 1st floor of their own houses. Efforts underway to move them to safer areas underway..Praying..

Praying for abatement of floods in Kashmir. Courage to the rescuers and patience and faith to an anguished people.

Thoughts are with all the families affected by the floods in Kashmir and wishing the rescue teams all the best in their efforts. #weR1

Over 100 people have died in floods due to incessant rainfall this week in Jammu and Kashmir. They lost their lives and many villages washed away with the heavy rainfall.