Anurag Kashyup’s Bombay Velvet movie had a lot of aspects attributable to which it has been the matter of talks amongst the audiences since a long. Highly popular star cast and much know director/producer as the baddie and a maestro as the director, blend of all the factors was only expected to be tremendous. However, sadly the film turned out to be an astonishing unimpressive take on the big screens.

What might have taken Anurag’s talent, a notch higher, became a letdown. We are here to talk about Bombay Velvet Box Office Collection, to make out the film’s business in figures.

The film poorly opened at the box office with 15-20% of occupancy, and a slow pace. On the first day of its release, the film that was expected to earn 10-12 crores only managed to amass 5.20 crores. 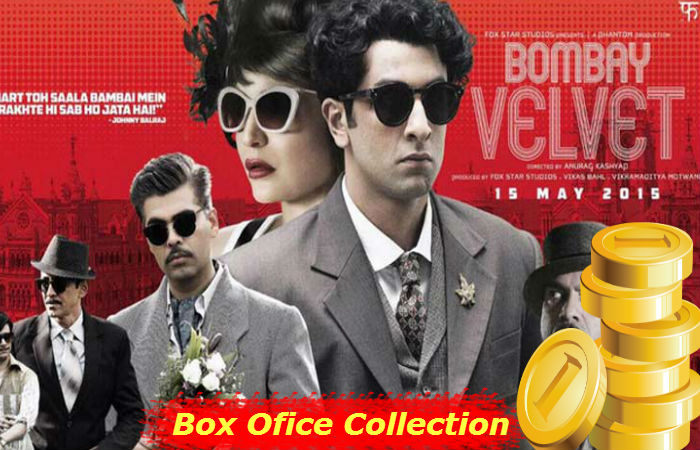 Amid the last released Piku, which was just a simple story of a father and daughter duo, the noir set in 60s of Bombay seemed fading? Where Piku has been enjoying its steady pace at the box office, conversely the bad word of mouth turned Bombay Velvet sink. The second box day collection of the movie didn’t showed any signs of improvement and once again it gathered 5.25 crores, making two days of its overall collection to be 10.45 crores approx, on the domestic front.

The story of the film was that of a boy Johnny Balraj played by Ranbir Kapoor, who heads Bombay with the intention to become a big shot. Another pivotal role of the film was of Anushka Sharma and Karan Johar, who depicted a jazz singer and an evil land dealer respectively. Neither the characters, nor the story managed to hold the audiences to the theaters, consequently the third and the last day of the weekend, also didn’t turned out to be yielding. On the third day, the overall collection was reported to be approx 6 crores.

Since the release of the film, a low pace on the ticket counters was noticed however, the makers of the film might not have expected Bombay velvet movie to just earn 16 crores on first weekend of its release. As much as we talk about the total production cost of the movie, it was said to be made with a whooping amount of around 120 crores. Well this means the makers have to bare a huge loss with this big-ticket movie.

Anurag Kashyup, who is specially know to show his excellence in his film, sadly fell short with his commercial attempt. Nonetheless, the director took it to twitter, raising the spirits of his cast and crew. He asserted that his work might haven’t worked out for many however he believe in his film and he wanted to make it and glade that he made it.

We will only say that Anurag no need to lose faith, as we know you are a maestro and few falls in the path of success cannot hinder your self-reliance.

Saath Nibhana Saathiya: Ahem to Get Along Gopi’s Truth!