There isn’t any doubt that every single person is in a tizzy after the devastating earthquake in Nepal. Measuring 7.9 on the Richter scale, the freak accident took a death tool over the complete mountainous nation. Soon after the natural calamity many rescue missions have been incepted in the country however, the Mother Nature has taken the lives of many, yet. Over an estimate of 3000 people have lost their lives yet due to the impact of the catastrophe that hit the nation two days back.

Not just the common people, celebrities from Bollywood are even terror-stricken and worried for the lives that had been taken and in danger, in the neighborhood country. Soon after the news amid earthquake in Nepal seeped out, twitter was seen cloudburst with tweets from celebrities of all walks. Be it Megastar Amitabh Bachchan, Madhuri Dixit, Gul Panag, Shreya Ghoshal or Arjun Rampal, everyone expressed their worries for the locals of Nepal. 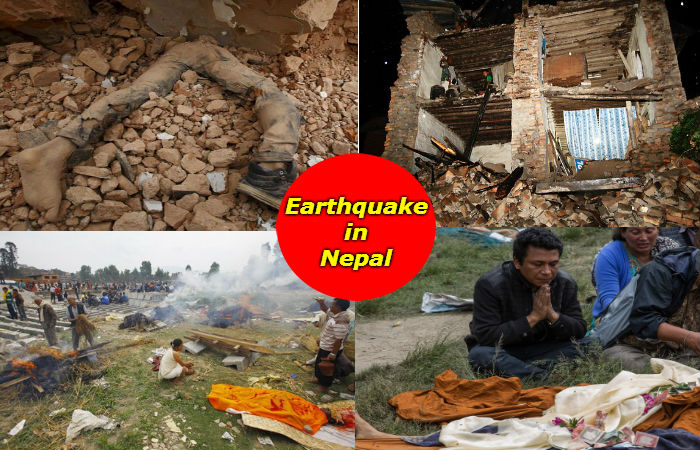 Twitter seemed chock-a-block with prayers for the people stuck at the devastated zone. The destructive pics coming from the country made every celebrity have cold feet, who had even been to the place. Amitabh Bachchan was himself witnessed taken aback recalling a song for the movie ‘Mahaan’ that he shot at the mountainous nation.

Bollywood cum TV celeb Ruslaan Mumtaz also shared his story, and informed that he was himself there at the place a news days earlier the disparaging earthquake. He informed that he was there at same place at Pokhra, which become the main victim of the destructive earthquake. Actress Mugdha Godse was also present with him for the shooting of a film. He also shared his pic at the place that has turned a sight of destruction today. Where the actors are safe, shockingly 8 locals, who have been appointed as the crew of the film have lost their lives in the disaster.

Furthermore, Bollywood’s much known name, Manisha Koirala, who herself has her root down to Nepal, also shared her grief, over the same. The actress couldn’t averted herself from shedding tears seeing such wreckful reports coming from her hometown. Being the granddaughter of BP Koirala, first elected Prime Minister of Nepal, she even thanked Indian PM Narendra Modi for the help and immediate rescue support that has been sent to the place.

Moreover, not just Nepal, India was even felt jolted with tremors that have been felt in many of the parts of the country. There were stars like Arjun Rampal and Parineeti Chopra who felt the impact of tremors and were seen alarmed after the earthquake hit.

Earthquake in Nepal has left everyone stunned and aftershocks of the disaster are even presenting a heart-wrenching panorama. Whether it a normal person or a celeb, India is with all heart praying for the safety and wellness of the people of Nepal. May all the soles rest in peace and the almighty bestow strength to all those, who been the victim of such a caustic demolition.