The movies that you watch on big screens convey the stories that feel real to the crowd and the folks identify the stars relationship as they are the family in real lives. Behind the successful working and shooting for more than 18 hours a day the dramas at the sets are made just like the real one.

Have a look on Bollywood Celebrities Families and their Pictures:

Talking about Sharukh Khan Family, the king of the romance has very beautiful lady to hold his hands in the public with three adorable kids in their group. Shahrukh Khan got married with Gauri Khan and is blessed with two boys Aryan and AbRam with a girl Suhana. Shahrukh Khan Family Photos - The Priceless Moments to capture

Another name that is added in the family is Shehnaz Khan, who is the sister of Shahrukh also lives with them in ‘Mannat’, Mumbai.

Dabangg Khan of the Bollywood has come up with the family related with the cinema background. His father Salim Khan is the renowned script writer in the Bollywood. Salman Khan have two brothers which are now the famous producers and directors in the industry that are Arbas Khan and Sohail khan. Catch Salman khan Family photos here:

Malaika Arora Khan, which is formerly known by Munni of Dabangg is the bhabi (sister in law) of Salman. The sisters in the group are not merely indulge in movies Alvira khan is married with director Atul Agnihotri and Arpita is recently married with Aayush Sharma.

The Bachchan’s family firstly embraces the circle with none other than the Big B of the Bollywood Amitabh Bachchan, his wife Jaya Bachchan their son Abhishek Bachchan and daughter Shweta Nanda. Amitabh Bachchan Family Photos – Do not Miss the Best Camera Shot

This Bollywood family has added another member in their house in 2009, yes, the Bachchan’s bahu Aishwarya Rai Bachchan. The duos are blessed with beautiful and alluring baby Aaradhya on November 2012.

Anil Kapoor a well recognized actor for his dance steps in ‘Mera Naam Hai Lakhan’ and his brilliant performance in 100’s of films including oscar winner ‘Slumdog Millionaire’ has a wonderful and fashionable diva’s Sonam kapoor as her elder daughter, Rhea kapoor as the younger one and Harshvardhan Kapoor as the son in the family with Sunita Kapoor as his wife. 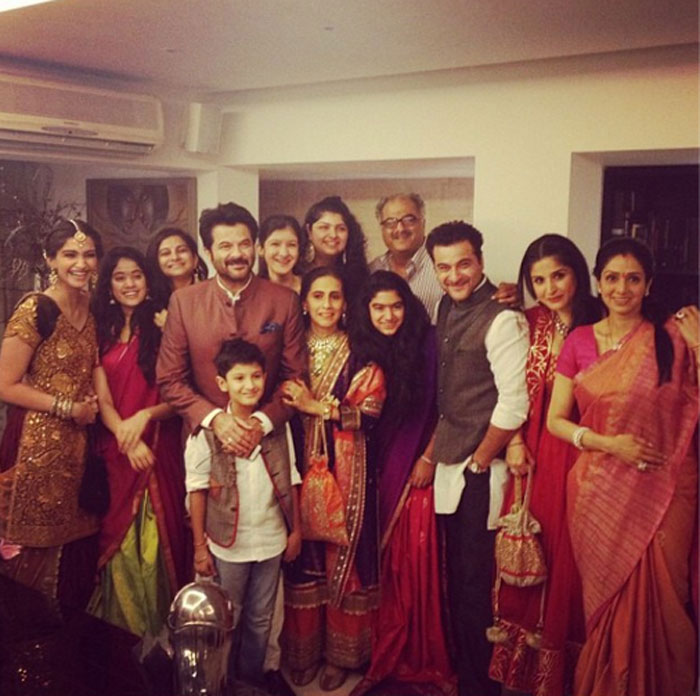 The amazing bond of the daughter and father relationship is many times caught in the camera in several events and TV affairs. Ishaqzaade fame Arjun Kapoor is Sonam’s cousin and she likes to spend her time with him.

The stars that have come up with the film history are often seen paired with some other on screens, yet in the real lives they are strongly connected with each other. The above Bollywood Celebrities family photos you have seen had surely flashed your family pictures from the album.