Bollywood industry is always teamed up with posh and ritzy film making field that underlines all the molds right from comedy to sadness, romantic to dull and thriller to calmness. It has also been noted that if on an average 100 films are released in a year than surprisingly 60 of the movies that released are of comedy genre. So take a look on Bollywood Best Comedy Movies List that you can heed and enjoy any time. 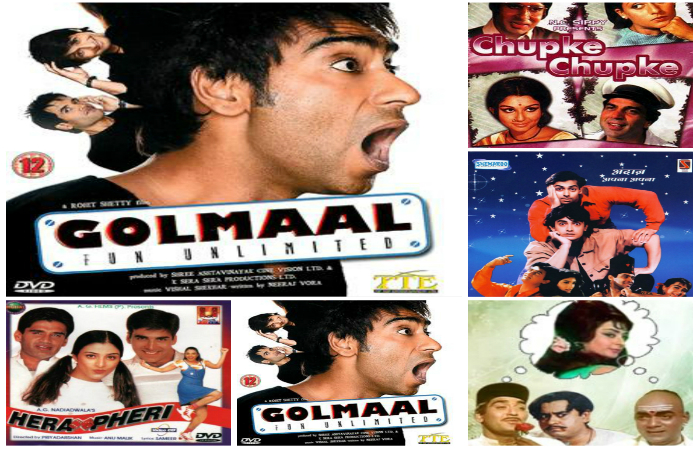 Chupke Chupke a film by Hrishikesh Mukherjee that featured two most legends of the B’wood town Dharmendra and Big B with Sharmila Tagore and Jaya Bachchan in key roles is the best epitome of the Hindi Comedy Movie where you smile and giggle all the way till the end. Complete package of comedy that embraces confusion, drama and suspense all in one marks Andaz Apna Apna in the list of Bollywood Best Comedy Movies. No doubt the stars of the movie Aamir Khan, Salman Khan and the actresses opposite to them Raveena Tandon and Karishma Kapoor have done excellent job in the film but poorly the movie did not earned high at the box office. Still the movie has made its way in the list of comedy movies ever.

Hera Pheri a film starring the best triplet of the Bollywood Akshay Kumar, Sunil Shetty and Paresh Rawal in the key roles encompasses a light comedy story that everyone surely enjoys and it can’t be missed. You don’t need to turn on your brain and think about the logic, simply turn off your smartness and enjoy the stupidity.

A complete paisa vasool film that is simply worth watching and even a cup of coffee can be added to the entertaining kit. The best film Rohit Shetty has made ever that wipes out all the mental stress and tension must be watched at least once. Sequels of Golmaal can also be ticked in the list to gaze but first part is the must watch types.

Padosan movie song ‘Ek Chatur Naar’ is still remembered by all till date, synchronously the story of the film that embraces appealingly light comedy is still in the heart of audience. Padosan is another old funny flick that is always counted not only under the list of Bollywood Comedy Movies but also in the list of cine that can be watched anytime to turn on your mood to perky one.

Not only these Bollywood comedy movies you have read so far are on the top of all, there are still number of such classic Hindi comedy flicks present that have not missed their graze even after a big change in genre and span.