On Saturday Puneet Issar and Sonali Raut are the two contestants who were evicted from the house by Salman Khan, and rest top five champions are Karishma Tanna, Gautam Gulati, Dimpy Mahajan, Pritam Singh and Ali Quli Mirza, pitted against five challengers of Halla Bol. 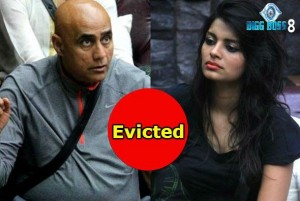 After Upen's shocking exit from the Bigg Boss 8 house, the house was left with seven contestants, out of which two contestant have been evicted on Saturday i.e. Punnet Issar and Sonali Rout and rest five inmates i.e. Karishma Tanna, Gautam Gulati, Preetam Singh, Dimpy Mahajan and Ali Quli Mirza as champions.

While Gulati got the maximum votes, Preetam was at number two followed by Karishma Tanna, Ali Quli Mirza and Dimpy Mahajan. Now they all will fight it out with top five Halla Bol Challengers i.e. Rahul Mahajan, Sambhavna Seth, Ajaz Khan, Mahek Chahal and Sana Khan for the top spot. Their energy makes us look forward to Bigg Boss Halla Bol with Farah Khan as a new host of BB8.

Gautam and Karishma are the most popular contestants on the block and have finally emerged as true champions at the end of Bigg Boss 8. But will they both be able to sustain their popularity after the Challengers make an entry? Let's wait and watch what happen next!!!

Kareena Kapoor Signs a Film Opposite to her Ex Shahid Kapoor