According to the source, the leading BJP government is mulling to bestow 'Padma Awards' to Bollywood’s megastars Amitabh Bachchan and Dilip Kumar on this republic day, 26 January 2015.

Well not only Big B and Dilip ji however South king, superstar Rajinikant is also said to get roped in the list of the nominees. Some renowned cinema actor, directors, producers, writer, lyricist are also likely to be nominated for Padma Awards.

You may also like: Amitabh Bachchan to Enact a Frustrated Man in ‘Shamitabh’ 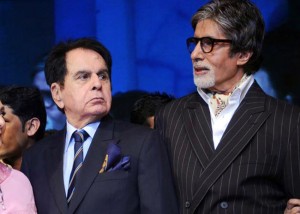 The two lastly shared the screen in 1982 with ‘Shakti’ movie, which was directed by Ramesh Sippy and produced by Musir Alam and Mohammad Riaz.

The Padma Award nomination list not only includes names from cinema personalities however here are also some names from the field of world culture and art, which includes;

Get more update about Amitabh Bachchan from Bollywood news.