If we talk about a single Bollywood film, the complete series is being wrapped up by number of dire traces that are taken under consideration while cooking up the shots for the film to make it recognized by all.

The ingredients that are added to make it a complete Bollywood masala action involves songs, dialogues, impressive script, beautiful outlooks and many more. With every Friday release some movies becomes everlasting hit just because of the dialogues. Catchout some best Bollywood dialogues of Salman Khan, Amitabh Bachchan and Shahrukh Khan here....

In the list of best dialogues of Bollywood, first name that pops up is of Shahrukh Khan who has given number of ideal dialogues from the films. 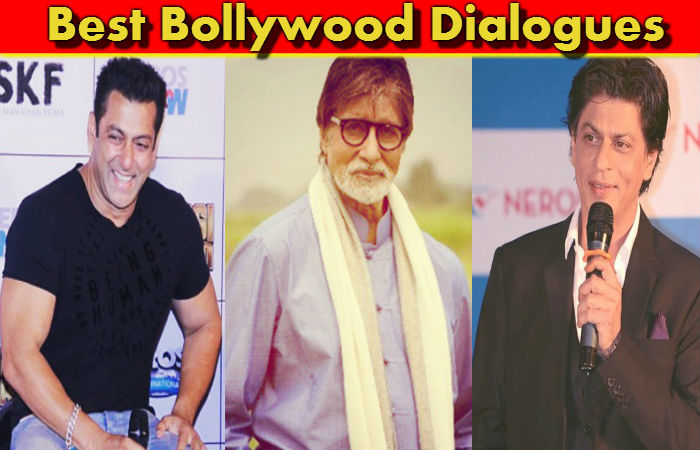 The most popular Dialogue from DDLJ;

Well, this dialogue is now most common and many of us add it when we make some gaffe Right?

When we experience Loss or when we have to suffer the fall of coins in casino, the popular words that came in our mind that creates some positivity again.

Not only dance steps of Salman Khan are recognized by his fans, the lines that he speaks more help us in identifying his films.

Whenever someone tries to think more about you especially the person you don’t like. You say:

The dialogue that became so popular before the movie got released:

Amitabh Bachchan the dignitary of the Bollywood industry has done action movies, comedy and dance dramas and successfully entertained us all through six seasons of KBC.

The first dialogue that came in our mind when someone ask us to speak just a single dialogue of his movie.

When we see someone with long moustache instantly we say-

Most frequently it has been seen that when we feel that we are the strongest person in the world, the dialogue that we say is

The perfect dialogue that suits when we are waiting in the queue, You can always find a person or two after getting frustrated and annoyed always says this.

Bollywood Actors Real Names – The Name Given by Their Parents

Splitsvilla 8 Buzz! Sunny Leone Makes a Naughty Task for Girls, While One Girl Contestant Kisses to other Girl