Bollywood actress Vidya Balan always sunk herself in the character. Recently the first look of her upcoming release Begum Jaan is out and no doubt the diva has completely nailed the look. Vidya is seen resting on Charpai while smoking a hookah. In the film Vidya is playing as the madam of a brothel.

Apart from Vidya Balan another gorgeous lass Gauhar Khan is seen serving her hookah. The actress in messy look is expected to serve the best out of the dish yet again. Begum Jaan (Vidya Balan) is that woman who has faced hard times and Gauhar Khan is seems to be the right hand of Vidya.

Vidya Balan Recalls Her Past Mistakes Over Wrong Choices 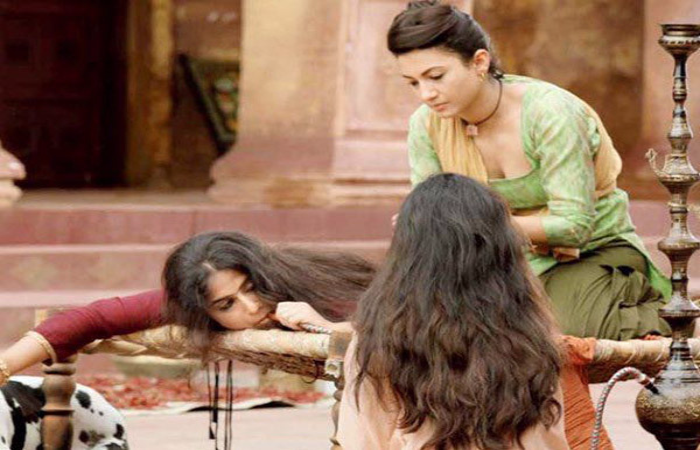 Begum Jaan Gets an A Certificate by the Censor Board!

Gauhar Khan rose to fame with her memorable part in Ishaqzaade is sharing the space with Vidya Balan for the first time. The two will own up the screen, Gauhar’s role might have a supporting one in the film but she can’t be missed in this first still.

Although censor board didn’t demand for any cuts, but a few words have been replaced in the script. They didn’t want any cuss words in the film.

Vidya Balan’s past release Kahaani 2 didn’t grab the attention of the audience much but her performance got good response via critics. Begum Jaan is all set to hit the silver screens on 17th March 2017. The film is directed by Srijit Mukherji (A national Award Winner).

Begum Jaan also features Pallavi Sharda, Chunky Pandey, veteran star Naseeruddin Shah. With so many talented artists in a single frame this movie is surely gonna rock on the screens. What you guys think?