In the recent episode of Bigg Boss 8 Halla Bol series, Bigg Boss announced the final task ‘Akhri Seedi’ to win the Golden bag, which contained Rs 25 Lakh. A ladder was placed below the Golden bag, painted with red and green color one for each team.

Now the twist was that, some steps of the ladders were missing and the opposite teams had to guard the ladder steps of the other team in order to protect them reach the bag.

You may also like: Shocking: Upen and Karishma Gets Engaged In the BB8 House

We all know that the contestants of BB8 can’t complete any task without creating a scene. In the middle of the task, Karishma Tanna started blaming Pritam Singh for playing dirty politics and also unveiled how Pritam was talking dirty things about Gautam Gulati behind his back.

After the last fight between Sambhavna Seth and Dimpy, it seemed like Dimpy was obstinate for initiating a fight with the challenger contestant Sambhavna, thus she dragged the name of Sambhavna and the much famous or we can say infamous, catfight between the two started. 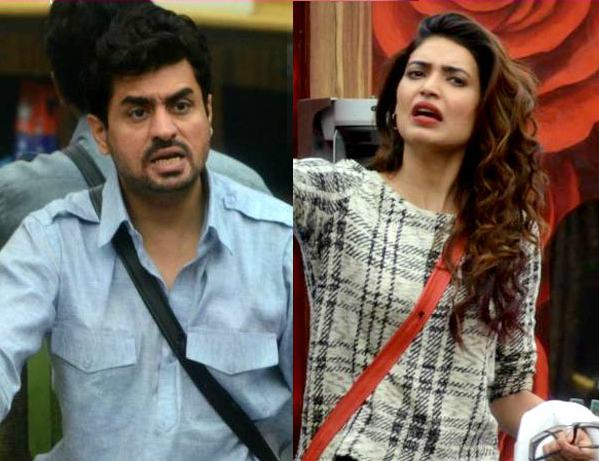 Later she said that she only meant to say ‘giver’ but Sambhavna intentionally construed the word for publicity. But the question was that, does Dimpy really called Sambhavna Seth a prostitute. Sambhavna was highly offended by the incident and she warned the Bigg Boss to call her in the confession room otherwise she would harshly beat Dimpy.

Apart from all these fights, Ali Quli Mirza very artfully convinced Dimpy to give him the steps that she was protecting. But Ali and Pritam mislead Dimpy and run away with Dimpy’s share of steps even before she could reach them.

After then she was extremely worried what her teammates would say and she request Ali and Pritam to settle the score by returning her the steps. Thereupon Pritam and Ali returned her back the steps, which she was protecting.

Salman‘s Efforts for Swachh Bharat Abhiyan Gets Appreciated by PM