It was predefined that Akshay Kumar’s upcoming thriller movie ‘Baby‘ will not have any song, but the makers of the movie decided to come up with a high octane thriller theme song called ‘Beparwah’. This electrifying track is directed by Sanjay F Gupta and composed by Meet Brothers Anjjan.

The Baby song ‘Beparwah’ is featured on Bollywood’s Angelina Jolie or ‘Razz 3’ hot actress Esha Gupta. The audio of this song have been already released and is doing quite well amongst the listeners. Now the makers of the film launched the first look of Esha Gupta from the video of ‘Beparwah’ song. 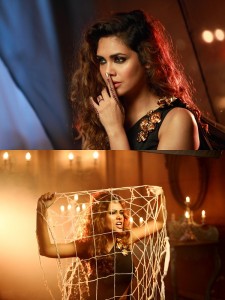 You may also like: ‘Baby’: Esha Gupta to Groove to the Beats of ‘Beparwah’

Rana Daggubati, Tapsee Pannu, Anupam Kher, Kay Kay Menon, Danny Denzongpa, Sushant Singh and others are also in lead roles in the flim with Akshay Kumar. The movie has been directed by the talented Neeraj Pandey and is slated to hit silver screen January 23, 2015.

Priyanka Chopra Talking on Delay of her Forthcoming ‘Madamji’