The actress has always been mum on the matter of her relationship with Virat however Filmfare Magazine features Anushka Sharma’s blunt and open confession about her love life and status.

The actress gets featured on the covers page of Filmfare Magazine for its March 2015 edition. 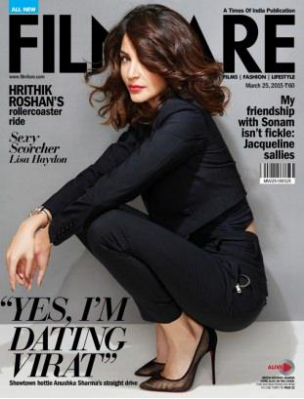 You may also like: Most Enticing Anushka Sharma Kissing Scenes in NH10 Movie

Donning a black attire paired up with an orange lip color, Anushka is opening her heart captioning, “Yes, I’m dating Virat.” This news confirms that the alleged couple is dating since a year and now has finally come about in an open relationship.

Nach Baliye 7: Mahesh Bhatt to be a Part, Anurag Basu to Judge!