Not many Bollywood celebs like sharing their personal life in media. Just like the case, Anushka Sharma is so much private into space as we even remember how Virat and Anushka had a secret wedding in Italy last December and later on announced in social media. No wonder, the two are seriously in love and never fails to impress their fans while sharing the romantic pictures and sweet gestures over their Instagram account.

But it looks like someone has published a false report about Anushka Sharma and the diva is seriously pissed off. A fabricated report is been published in Bengali newspaper and not only actress we are also not much happy about it. Yesterday, she took her twitter handle and slammed the publication for publishing a fake story.

Anushka Slammed the Bengali Publication For Reporting a Fabricated Story 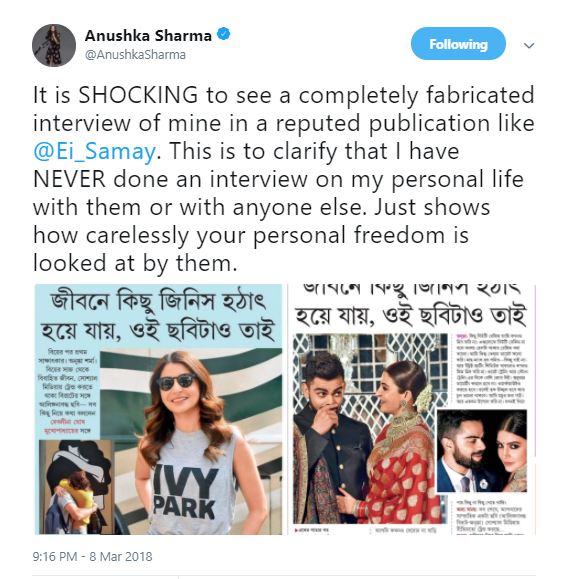 She further clarified that she has never done an interview with Ei_Samay, and this fake publication shows how carelessly your freedom is looked by them.

Even after marriage, the two have not disclosed much about their personal life. Earlier it was reported that the famous film director Karan Johar wanted to open his new season of Koffee with Karan with the two, but the reports turned down.

The Sultan actress Anushka Sharma was last seen in Pari, the film was produced under her production banner. Though the film didna��t earn a good response at the box office, her performance was much appreciated. Currently, she is quite busy in preparing for Sui Dhaaga with Varun Dhawan, next she will be seen in a�?Zeroa�� opposite Shahrukh Khan and Katrina Kaif.