Bollywood actors Ranveer Singh and Anushka Sharma are Ex-lovers it is hidden to none. Now the duo will be doing a love-making and sizzling item song in the forthcoming movie of Zoya Akhtar’s 'Dil Dhadakne Do’, scheduled to be release on 5th June 2015. ‘Dil Dhadakne Do’ is a drama movie, produced by Ritesh Sidhwani and actor Farhan Akhtar.

‘Pk’ fame Anushka Sharma plays the role of a bar dancer in the movie. The ‘Band Baja Baraat’ Jodi will be seen doing lots of love-making scene in the movie.

You may also like: Anushka Sharma’s Sizzling Item Number from ‘Dil Dhadakne Do’

Well Break ups and patch ups are extremely common in Bollywood industry. Concerning which the actress earlier said that she doesn’t have any problem in doing intimate scenes on screen with Ranveer Singh. 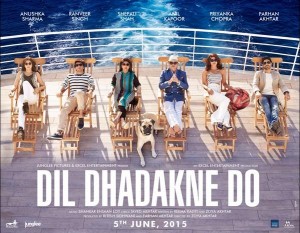 The beautiful B-Town actress Anushka Sharma recently packed up Zoya Akhtar’s new venture ‘Dil Dhadakne Do’ in which she will be depicting a never-seen-before avatar opposite Ranveer Singh.

A close source reveals that the item song is ‘Swing’ and along with Anushka and Ranveer the song also features other members of the movie such as Priyanka Chopra, Farhan Akhtar, Anil Kapoor and Shefali Shah.

Get more about 'Dil Dhadakne Do' movie  updates from Bollywood News.