The trailer of Umesh Shukla’s most awaited All Is Well movie is finally revealed. We can say the movie is completely a fun entertainment featuring Rishi Kapoor, Abhishek Bachchan, Supriya Pathak and Asin in lead role.

In the movie Rishi Kapoor will presented as a 60 year old, 7th standard drop out, who runs a bakery shop but doesn’t received any profit in this. He appears to vent out all his disappointment on his wife (role played by actress Supriya Pathak). Who is suffering from the disease called ‘amnesia’.

All Is Well Trailer: Tu Tu Main Main Between On Screen Father and Son

Going by All Is Well Trailer, It can be considered that every character in the movie has a problem in life. Jr. Bachchan and Rishi Kapoor (Playing on-screen father-son role) duo loggerheads with each other in this movie. 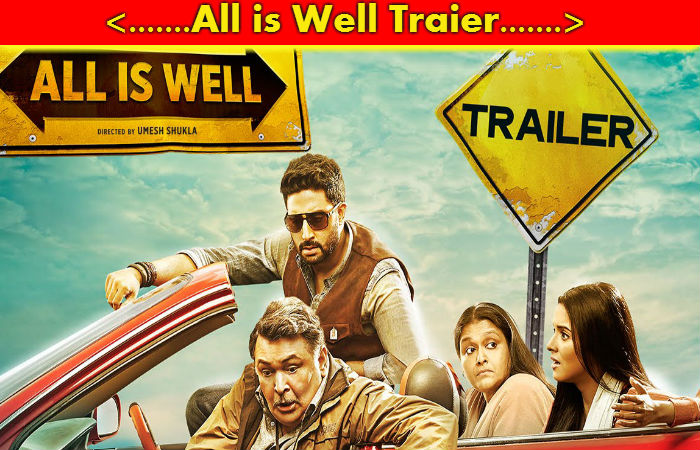 Abhishek Bachchan is introduced as the responsible son, who keeps his family together, while Rishi is the boisterous mouthed one. Asin looks beautiful but hardly has any dialogues in the trailer. And off course Supriya Pathak also cannot go unnoticed.

All Is Well Trailer: Best Duo Rishi Kapoor and Abhishek Bachchan Are at Daggers Drawn

"The story is basically about a dysfunctional family who don't quite get along with each other. The plot revolves around a road trip where the characters need to somehow resolve the differences between them," Abhishek utter word about this movie.

Abhishek will be shaking a leg with Rishi Kapoor in an item number starring Sonakshi Sinha.

Rishi Kapoor said: "I've done five wonderful films with Amitabh Bachchan and I'm hoping that with 'All Is Well', I can present a similar entertainment film with his son Abhishek."

The All is Well trailer looks appealing and completely a family drama. Bhushan Kumar production venture is all set to release on August 21, 2015.

All is Well Cast and Crew

Yash Raj Produced the Most Abusive Bollywood Film Ever