Bollywood Hot hunk Shahid Kapoor and lovely Alia Bhatt are busy these days with the shooting of their forthcoming flick, ‘Shaandar’ in chilling winters of London. It seems meanwhile with their work Shahid and Alia, both are spending a good time in each other’s company! Well the pictures shared by the actors every now and again, illustrates so.

Shahid and Alia’s Selfie Saga from the Sets of ‘Shaandar’

Recently Shahid Kapoor took it to his tweeter handle and tweeted a selfie, having a group hug with co-actor Ali and her baby sister, Sanah.  The actor wittily stated that the duo is keeping him warm in the freezing cold. On the contrary Ali even took her instagram account to share a selfie with Shahid.

You may also like: Shahid Kapoor-Alia Bhatt starrer ‘Shandaar’ a wedding film? 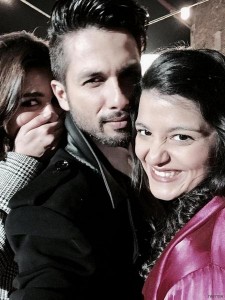 About Alia and Shahid’s ‘Shaandar’

Produced by Dharma Productions and Directed by Vikas Bahl, the director who rose to fame by his film ‘Queen’, ‘Shaandar’ is a destination wedding film.

Ileana D'Cruz Strips Flaunting Her Shirt Off, For “Happy Ending”