Bollywood actor Akshay Kumar is once again ready to return to reality TV serial with ‘Master Chef India 4’ as a Maha Judge, after his actions show ‘Dare 2 Dance’.

As known by all, Akshay who was the judge of Master Chef India Season 1, used to be a chef in Thailand prior his Bollywood career.

You may also like: Exclusive: Akshay Kumar’s Two Shades in ‘Baby’ Movie

"The programming team is trying to get Akshay on board the show as 'maha-judge'. Nothing is finalized yet as talks are still on," said a source. 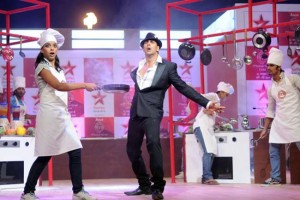 India’s culinary experts Vikas Khanna, Sanjeev Kapoor and Ranveer Brar will be the judges of Master Chef India season 4 and would premier the show by January last week.

In the last three seasons, Chef Kunal Kapoor was seen as the judge however in this season we will get to see a new judge Ranveer Brar in his place.

Khiladi Kumar’s love for cooking is not a cryptic secret. Thus Akshay Kumar’s role as a ‘Maha-Judge’ is rumored as,

"As maha-judge, Akshay will rule over what the three judges say."

We can just wait to watch out the twists and turns, and the maha judge Akshay Kumar in the upcoming season of Master Chef India.

Get more about Master Chef India 4 from Indian TV serials.