The upcoming movie ‘Shamitabh’ features Big B and the south actor Dhanush in the lead roles. In the movie Shamitabh, which is directed by R Balki you will again get to see Amitabh Bachchan and Abhishek Bachchan sharing the screen, after 6 long years.

Amitabh Bachchan's son ‘Abhishek’ recently revealed during the press conference that he would be doing a cameo role in the movie 'Shamitabh'.

The producer of the film ‘Abhishek Bachchan’ unveiled in the Filmfare conference that- "I've done a passing role in Shamitabh". After playing the role of ‘nandu’ in the movie ‘Happy New Year’ Abhishek now set to do a cameo role in his next venture. 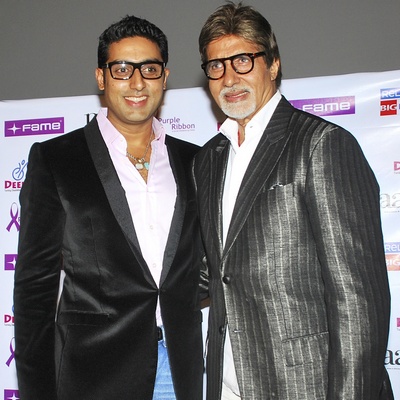 You may also like: What! Rekha and Amitabh Bachchan not Together in Shamitabh?

“He (R Balki) means a lot to me as a director, and helped me restart my production house with Paa. He made me into a producer by making Paa.” Producer Abhishek Bachchan always finds his screenplay attention grabbing.

The movie ‘Paa’ was also directed by R Balki and after six long years, Abhishek would once again work with the director his father’s film ‘Shamitabh’.

Abhishek’s statement -"Whenever Balki comes to me with a script, my initial reaction is that he must be drunk - his scripts are so unique. When he narrated me the story of Shamitabh I was surprised. I had a similar feeling when he offered me Cheeni Kum and Paa. He was very clear about what he wanted from me, including my looks."