Director-Choreographer Remo D’Souza revealed the first look of his upcoming venture ‘ABCD 2’, in which total 60 kites were used during the shooting of the whole song.

You may also like: Shraddha Kapoor Sweating It Out Over Dancing For ‘ABCD 2’! 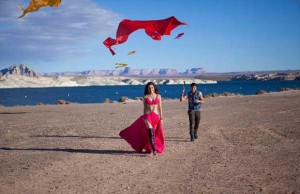 Varun Dhavan Starrer ‘ABCD 2’s cast recently flew all the way to Las Vegas for shooting the romance between ‘Badlapur’ actor Varun Dhavan and ‘Aashiqui 2’ fame Shraddha Kapoor. It was director’s idea to shoot this song in the exquisiteness of Las Vegas. This romantic track was shot at a chilly scene at Vegas in frizzing temperature but both Varun and Shraddha were seen wearing summer cloths.

In a recent interview, Remo D’Souza stated, “You’d think it was a nice sunny day, but it was freezing!”

A Sky Full Of Kites, For Augmenting Varun and Shraddha’s Romance

When the whole star cast and crew reached the location, the director Remo D’Souza saw a solitary kite in the Vegas sky. The director then immediately decided to use beautiful kits in the song to increase the romance. Approx 60 kits were used during the shooting.

Get more update about 'ABCD 2' movie from Bollywood News.