Feminism is the hottest topic of the town now and Bollywood actresses are actively participating in the topic. Recently Kangana Ranaut rocked at the Mind Rocks Debate in Delhi. She answered very boldly and frankly about the feminism and sexisim. And now another gorgeous actress of the tinsel town Kajol is giving it over. Kajol is promoting Radhika Apte’s upcoming release Parched. The film is from Ajay Devgn’s production. 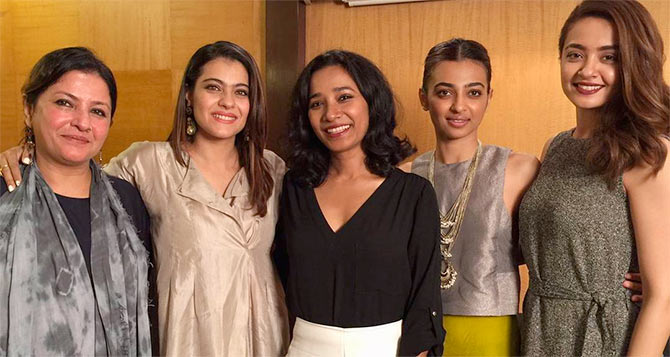 Parched is all about the women who face many social issues. Kajol said that the film deals with social issues but there is lot of entertainment too and has a strong message.

“I think what it’s actually about is twisting your perspective around. It has to do with women, of course, it’s about women – but it has to do with how you face a problem. The problem can either seem insurmountable, like oh my God, I’m never going to be able to defeat it… or you can just find a way around that big mountain and take the long way round – but you’ll get there eventually.”

Kajol Speaks About Feminism and Building Other Women up

What you want to teach your Daughter Nysa?

I think Parched is about hope and not believing everything you’re told and trying to think for yourself. The one thing I’d like to teach Nysa is how to think for herself and not to blindly accept anything that anyone – including me – dictates to her.

What is your Definition of Feminism?

“I think a feminist is a woman who knows her strengths, knows her weaknesses, and at the same time is balanced enough to understand that when she needs to ask for help, she can. She’s not too much on the other side so that she can’t turn around and say ‘listen, I need help with this, please help me with this.’ I’m human. I’m not only woman, I’m human.”

Feeling guilty especially when you are a woman, what’s your take on it??

On Identifying as a Feminist –

A Message for Other women

We, as women, need to stand up for women. We need to support each other as a gender as well. Say ‘yay, go, you did it! You’re a woman, you did it! We’re behind you!’ I mean, the guys do it – we have the boys’ club, so why not the women’s club as well? [laughs]

Heartbroken! Angelina Jolie and Brad Pitt are getting Divorced